ACTA On The Borderline Of EU Acquis Communautaire 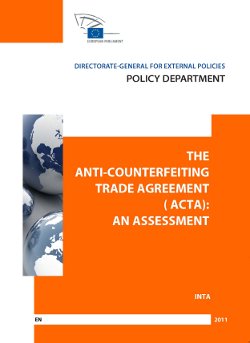 Recently the Directorate-General for External Policies of the Union (Directorate B – Policy Dept.) has published a study conveying an assessment of the Anti-Counterfeiting Trade Agreement (ACTA) which had been requested by the European Parliament’s Committee on International Trade (Contract No. EXPO/B/INTA/FWC/2009-01/Lot7/ 12 June 2011 PE 433.859 / Editorial closing date: 11July 2011). Of course, the study should be construed in a way that any opinions expressed in the document are the sole responsibility of the respective author(s) and do not necessarily represent the official position of the European Parliament. Political debates in coming fall will show the Parliament’s position.

Named authors of the study are:

As set out in the study, ACTA was born out of the frustration of the major industrialised economies with progress on monitoring and norm-setting on the enforcement of intellectual property rights in multilateral fora. In the WTO Council for TRIPS (‘TRIPS Council’), Brazil, India and China have consistently blocked the inclusion of enforcement as a permanent agenda item. At the World Intellectual Property Organisation (WIPO), enforcement issues were relegated to a purely advisory committee. According to the study, ACTA can also be seen as an extension of the existing strategies of the main ACTA parties to include significant provisions on enforcement in their bilateral and regional free trade agreements (FTAs).ACTA was motivated by a desire to establish common provisions in international trade agreements containing rules on anti-counterfeiting. Within the EU the ACTA has  been the source of some concerns regarding the non-transparent way it was negotiated and whether it meets to aims agreed by the European Parliament and Commission that it would be compatible with the existing acquis communautaire and the World Trade Organisation’s Trade Related intellectual Property rights (TRIPs) Agreement.

The question as to whether or not ACTA it in conformity with the EU acquis communautaire is of some political importance. Of course, the respective competent and empowered bodies of the EU are free to extend that acquis communautaire at any time if so decided. However, in view of general concerns of conflicts between ACTA and civil liberties and legitimate economic interests not based on IPRs, plus critics on the murky, secrecy-shrouded history of ACTA, there is a fierce public debate if ACTA should be ratified at all. In order to ease the formal adoption of ACTA, the EU Commission insists on their view that ACTA is merely declarative, i.e. it does not extend the acquis communautaire. If an expert opinion would supply reasons for rejecting this position, the Commission might well come into political trouble. This scenery appears to be the set prepared for the assessment now published.

ACTA was controversial both in terms of the process and the substance of the negotiations. The decision to maintain secrecy until the release of draft text in mid-2010 was to prove a significant handicap to public understanding and support for the treaty. The secrecy allowed significant misapprehensions to develop, while making it difficult for negotiators to communicate the actual scale and content of what was being achieved. There were also concerns related to; when documents would be made public; whether public interest groups had the same access as business and rightholder groups; what effect and relationship ACTA would have with the TRIPS Agreement, when and how much time the European parliament would have to exercise its duties and prerogatives to properly evaluate the treaty.

Substantive areas of concern covered a range of issues including: the potential negative effect of ACTA on fundamental human freedoms and privacy; the possibility of requiring cut off of internet access to consumers that infringe the agreement; imposing liability on internet service providers that carry content that infringes the agreement; the potential negative effect of ACTA
on access to medicines in Europe and in third countries.

Efforts to maintain secrecy did not prevent a heated debate on ACTA generated by leaked texts of proposals, evaluations and draft treaties and fuelled the suspicion that ACTA would entail a significant shift in the laws of ACTA countries and go significantly beyond the TRIPS Agreement.

This study finds that, in the case of the EU, ACTA does not entail such a significant shift in the EU Acquis, but that, while it is not fundamentally in conflict with the TRIPS Agreement, it is significantly more stringent and rightholder friendly than the TRIPS Agreement. Many of the substantive issues that raised concerns in the early position papers have been addressed or are entirely absent from the final agreed text. On the other hand ACTA also does not appear, on its own, to have a significant impact on the EU’s innovative capacity or its global competitiveness. This is partly due to the relatively modest scale of the outcome, as well as the fact that ACTA will not require any change in the laws or regulations of significant competitor countries such as Brazil, India and China.

In the end, as the primary recommendation the study would recommend that:

In particular the authors of the study recommend the Parliament consider that its conditional consent include:

According to the study as discussed here and in light of the analysis conducted the authors think it can be argued that the provisions of ACTA appear to be, in most cases, in line with the EU acquis communautaire. However, in some cases, ACTA is arguably more ambitious than EU law, providing a degree of protection that appears to go beyond the limits established in EU law. Therefore:

However, For those European Parliamentarians for whom conformity with the existing EU Acquis is not sine qua non, the authors of the study discussed here think that such consent should consider modifications that include:

Those players who prefer ACTA being rejected in its entirety by the European Parliament do not get endorsement by the authors of the study:

2 Responses to ACTA On The Borderline Of EU Acquis Communautaire