Intransparent Wheeling And Dealing re Unified Patent Court: Shouldn’t We Be Tired Of Being Put Off? 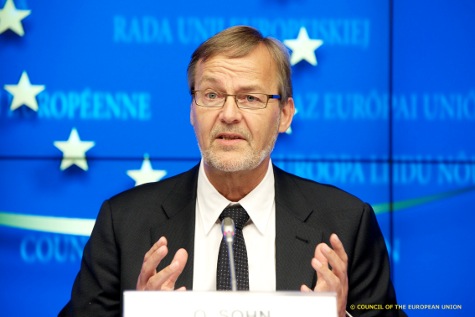 Today, the 3169th Council meeting of the EU Council in Competitiveness configuration (Internal Market, Industry, Research and Space) was held in Brussels, chaired by Mr Ole Sohn, Minister for Business and Growth of Denmark. According to Document 10362/12, the Council

– held a preparatory debate in order to gather consensus on the location of the seat for establishing a unified patent court, with a view to a successful decision on the seat by the European Council at its meeting on 28-29 June 2012.

This means, of course, that once more no political solution was reached.

A few days ago, the Danish Presidency had circulated an important Document 10059/12 titled Draft Agreement on the creation of a Unified Patent Court – Suggested way forward for a political agreement which, however, – but no surprise – was not released to the public.

I have heard rumours from confidential sources that at the end of 2011 under the Polish EU Presidency some or all of the political actors dealing with the EU Unitary Patent / EU Unified Patent Court matter decided to drop all expert advice from (internal) civil service experts (from the EU Commission and the delegations of the EU Member States present at the EU Council meetings) in order to force a breakthrough by some purely political decision on the seat of the central division of the Unified Patent Court. If this is true, this information might indeed be suitable to shed some light on the somewhat strange situation last December, when the announcement of the Polish Presidency communicated by Document 17539/11 to organise an initialling ceremony whereby the text of the Unitary Patent Court Agreement could be finalised in Warsaw on 22 December 2011 was eventually rescinded with no clear indication of what really had happened behind the scenes. The official line appeared to be that all problems but the seat of the central division are solved whereas other voices indicated that more substantial issues were still open. Probably the political staff had decided to ignore all opinions from the internal experts, concluding that the entire EU patent project is not suitable to generate a consensus in any foreseeable time amongst experts skilled in this field of law.

Ministers addressed the last outstanding issue in the draft agreement for the creation of a Unified Patent Court, with a view to finalising the “patent package” without delay.

The debate showed that further work was needed to reach consensus on the location of the Central Division of the Court of First instance for the future unitary patent jurisdiction.

At the time being it is not known to me as to what nature the further work was needed to reach consensus on the location of the Central Division of the Court of First instance is supposed to be.

2 Responses to Intransparent Wheeling And Dealing re Unified Patent Court: Shouldn’t We Be Tired Of Being Put Off?