Software Patents: German CDU/CSU Foxed By Anti-Patent Framing Of NGOs From Past Decade 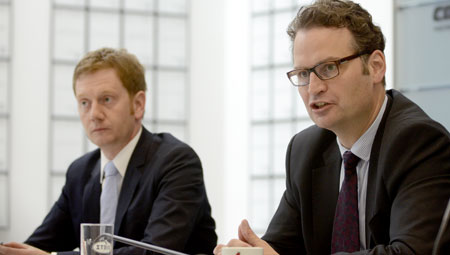 On an Official blog website blogfraktion.de of the parliamentary group of the Christian Democratic Union / Christian Social Union (CDU/CSU) in the German Bundestag I recently stumbled upon a green paper concerning copyright in the digital society (Diskussionspapier der CDU/CSU-Bundestagsfraktion zum Urheberrecht in der digitalen Gesellschaft) presented by Deputy Party Whips Mr Michael Kretschmer and Mr Günter Krings. While the main topic of this text, of course, is directed to copyright issues, we also can find a single paragraph devoted to so-called software patents or, more technically, patents on computer-implemented (respectively implementable) inventions as follows (I did some plain copy/paste operation and refrain from correcting spelling errors in the German original):

I would like to offer my own translation as set out below:

8. Copyright instead of software patents

Computer programs are rightly protected by copyright. “Software patents” on source code run contrary to the purpose of protection by copyright. Protection by copyright is more flexible and encourages innovation more because it does not require intricate and expensive patenting proceedings. Moreover, the applicability of the [German] law of contracts on copyrights strengthens the coders (creators) compared to software companies (exploiters).

The first sentence of this statement asserting that computer programs are rightly protected by copyright is one of the few snippets of information from the text as quoted above which is by and large correct insofar historically the Council Directive 91/250/EEC of 14 May 1991 on the legal protection of computer programs had stipulated in its Article 1 that Member States shall protect computer programs, by copyright, as literary works within the meaning of the Berne Convention for the Protection of Literary and Artistic Works. However, the term “rightly” (“richtigerweise” in German) might, at least for German ears, be construed like suggesting that software protection by copyright is the only (proper and legitimate) way to define software-related Intellectual Property. This is not true. Article 9 paragraph 1 of the Directive says (emphasis added):

The provisions of this Directive shall be without prejudice to any other legal provisions such as those concerning patent rights, trade-marks, unfair competition, trade secrets, protection of semi-conductor products or the law of contract. [...]

In the next sentence: “Software patents” on source code run contrary to the purpose of protection by copyright, a stark theory is proclaimed deepening this initial stub of mis-understanding the law by setting forth in more detail there is sort of a contradiction between copyright and patent law. In fact, copyright law and patent law are mapped to different aspects of computer software, respectively:

The run-time behaviour of a certain computer program cannot be deduced from its text (“code”) alone. The dynamic semantics of the text largely depends on the processor which is assigned to execute the program. In fact, text and behaviour are largely independent from each other:

The present option of obtaining patents on novel and inventive inventions exhibiting sufficient sort of technological character and being embedded within the functionality or of dynamic semantics of software opens the choice to run businesses on a wider variety of business models.

Hence, software patents can’t run contrary to the purpose of protection by copyright because of copyright law, on the one hand, and patent law, on the other hand, are tied to utterly different aspects of software. Copyright and patents are, hence, complementary or orthogonal to each other when discussed in the context of software.

But now the blog post under scrutiny goes even further by stating: Protection by copyright is more flexible and encourages innovation more because it does not require intricate and expensive patenting proceedings. No reason is given supporting this thesis. Is there some general rule that everything that does not require intricate and expensive proceedings is suited to be more flexible and encourages innovation more? Start-Ups, SMEs, and large enterprises face a lot of red tape involving  intricate and expensive proceedings in many other fields of law. Might be an interesting challenge also for the CDU/CSU parliamentary group to discuss this matter in some wider context than only with regard to the patent system. Anyway, due to the orthogonality between patents and copyright there is no substitution between them.

The authors of the blog post do not stop here. They are attempting to surpass the previous mark by stating that the applicability of the [German] law of contracts on copyrights strengthens the coders (creators) compared to software companies (exploiters). Well, it appears as if they have not read the [German] Copyright law. Section 69b thereof reads:

An English translation of this section offered here reads as follows:

Article 69b Authors in Employment or Service

(1) Where a computer program is created by an employee in the execution of his duties or following the instructions given by his employer, the employer exclusively shall be entitled to exercise all the economic rights in the program, unless otherwise agreed.

This is quite different to the regulation concerning ordinary works of literature etc., not software, in Section 43 where stipulation is made that the rights remain with the author even if the author has created the work in execution of his duties under a contract of employment or service provided nothing to the contrary transpires from the terms or nature of the contract of employment or service. Hence, concerning computer software in contrast to other categories of works, I cannot see where there are benefits for the creators emerging from any applicability of the [German] law of contracts on copyrights strengthening their position compared to that of software companies. Compare with patent law: There, the German Act on Employee’s Inventions gives hired personnel right to extra remuneration.

Now let us turn to the assertion saying a Draft proposal of the EU Commission for creating a unitary practice of patenting of software has failed in 2002.  The authors of the blog posting obviously refer to the Proposal for a Directive of the European Parliament and of the Council on the patentability of computer-implemented inventions, which, however,  was presented by the Commission in 2002 and folded only in 2005. But what on earth is meant with: The parliamentary group of the CDU/CSU in the Bundestag maintain their rejection of any broadening of the practice of patenting in the field of software?

My interpretation thereof goes as follows: The Draft Directive identified above correctly addresses its objective as

This Directive addresses this situation by harmonising national patent laws with respect to thepatentability of computer-implemented inventions and by making the conditions of patentabilitymore transparent.

is by no means determined by ambitious NGOs but by competent Boards of Appeal of the EPO and by Courts in the EPC Member States deciding in cancellation matters. And, there cannot be any reasonable doubt, they have decided and continue to decide in countless cases that in principle patents on computer-implemented inventions can well be valid provided that some additional legal requirements concerning technicality are met.

Today, in 2012, we have to state that even a parliamentary group of a major party dominating the German Government gets taken in by some sort of illogical and invalid framing originally drafted six years earlier by political pressure groups eager to wreck the entire patent system.

By no means the review made here should preclude the CDU/CSU parliamentary group to take a critical view to the patent system as it stands today;  if they think that patent law needs reform / is unsuitable for software / is evil in its entirety, then they might say so in an outright fashion. But the paragraph on software patents as presented in the context of the Green Paper on copyright is clearly substandard because of it is based on false assumptions and riddled with inconclusive derivations.

This is worrying and a pity.

3 Responses to Software Patents: German CDU/CSU Foxed By Anti-Patent Framing Of NGOs From Past Decade