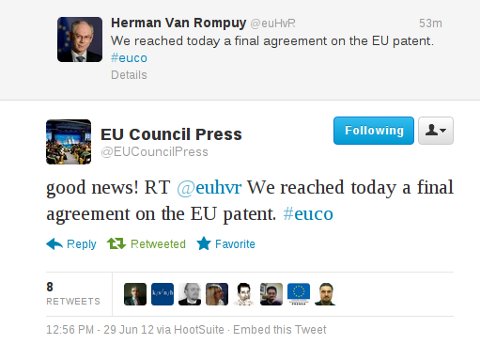 In this context, EU of course merely means enhanced co-operation, i.e.full EU minus Italy and Spain, the governments of which have opted out earlier due to their unwillingness to accept a language compromise reached by a large majority (see here and there). And, Italy and Spain have challenged the validity of the application of the enhanced co-operation procedure with regard to the Unitary Patent before the Court of Justice of the EU; see cases C-274/11 (Kingdom of Spain against Council of the European Union) and C-295/11 (Italy against Council of the European Union), respectively, which are still pending.

In January 2012 it looked as if most or all of the issues related to a political package comprising a EU Regulation creating a EU Unitary Patent, a EU Unified Patent court and a corresponding language regime are basically solved except, well, except the question of where the central division of the new Court shall be seated.

Earlier today, reports were emerging that a compromise proposal fostered by the President of the European Council, Mr Herman Van Rompuy, on the disputed location of the central division of the planned Unified Patent Court (envisaging that all contenders Paris, London and Munich would get their share) was about to falter: 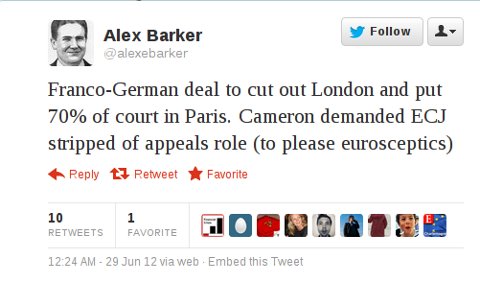 Obviously eurosceptic backbenchers in Mr Cameron’s own Tory Parliamentary Group were determined to cause trouble threatening to harm some of the further prospects of his political career if he would nod through a loophole for the Court of Justice of the EU to step into the field of substantive patent law. The point is that the present Draft for a EU Regulation creating the Unitary Patent comprises, in its Articles 6 to 8, a legal defintion of the effects of such a patent. The Regulation is subject to CJEU jurisdiction, and, hence, a bunch of eurosceptics in the UK, supported by some advocates of Industries also not very much liking prospects of CJEU judgement in patent matters, balked.

Toady in the morning hours it looked as if the entire patent package was bound to fail again because of there was no sign that Mr Hollande and Ms Merkel  might be willing to re-enter into any debate of the technicalities of the package already broadly agreed upon in December 2011.

Given the highly specialised nature of patent litigation and the need to maintain high quality standards, thematic clusters will be created in two sections of the Central Division, one in London (chemistry, including pharmaceuticals, classification C, human necessities, classification A), the other in Munich (mechanical engineering, classification F).

We suggest that Articles 6 to 8 of the Regulation implementing enhanced cooperation in the area of the creation of unitary patent protection to be adopted by the Council and the European Parliament be deleted.

Although it appears to be a good thing that finally the EU Unitary Patent has been agreed upon, a bitter aftertaste remains. At first, the breakthrough obtained today clearly is a defeat at the expense of the very core of the institutional structure of the European Union as we know it today. It is an open declaration of deep mistrust, if not political warfare, against the Court of Justice of the EU. Of course, there may be reasons for being dissatisfied with the past and current practice of the Court. But a normal and sane reaction would be to demand reforms of the Court, not blunt attempts to cut it out of business.

The legal validity of today’s compromise will sooner or later be challenged and finally be decided by the Court of Justice of the EU in the light of its previous decision A 01/09.

And, as a second point, the solution is typical for the way of finding a compromise in the EU: Not the merits of a solution count but face-saving. Time will tell if this model of a distributed Court really can work.

[...] Some 100 Conservative MPs wrote a letter to Cameron last week demanding a referendum on Britain’s relationship with the EU to be held in future years. Cameron argues that an in or out referendum is not the right choice now because the “vast majority of the British people” want changes to the current relationship with the EU, rather than to leave outright. [...]

Well, “Some 100 Conservative MPs” amount to a threat of a  potential backbencher’s revolt having the power even to topple a PM. Maybe this letter was the background for Cameron’s last minute move to cancel Articles 6 to 8 in the Draft Regulation.